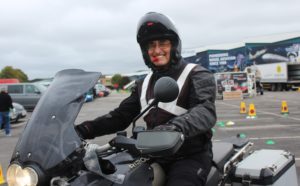 Having spent a lifetime in the military being deployed away to someone else’s beach often uninvited it was time to change one dangerous pastime for another!  That is what my Mum and Wife both thought when I declared I wanted to ride a motorbike.

So having convinced my wife Jo (I still haven’t convinced my parents) she insisted I get the best training available…so having passed my test in Sept 2009 I then did “BikeSafe” and “Ride-2-Arrive” courses with Avon and Somerset Police – learning curve takes the next steep climb upwards.

Wanting to continue my learning and training on how to ride more competently and confidently I looked through the 2 more well known Advanced Motorcycle training programmes which led me to Devon and Somerset Advanced Riders or DSAR and the RoSPA route, what appealed most with RoSPA was the requirement to be re-tested every 3 years to ensure the standards had not slipped.  Being regularly re-tested was nothing new to me as this is common within the military whether it is fitness tests, weapon handling and shooting tests or professional competency checks.

Training started and the realisation how much more there was still to learn and understand became apparent.  Following a successful pass (at 2ndattempt) to achieve Gold I was then invited to undertake local training to become a tutor within the group – learning curve takes another steep climb up again.  In 2013 I undertook and passed the RoSPA Diploma in Advanced Motorcycle Instruction which included becoming listed on the National Register of Post Test Trainers.

Having taken many riders through their training and experiencing their achievement at passing the RoPSA Advanced Motorcycle Test I continue to get a buzz from motorcycling, whether that be touring, commuting or training in all weathers – as it is said “If it’s not raining it’s not training!”

It doesn’t matter how good you think you are – there are always opportunities to learn so I continue thinking every day is a school day.  See you when the bell rings! 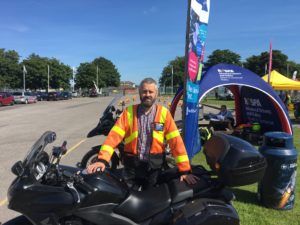 Started riding in 2000, a Piagio Vespa, and after doing a CBT for a year of riding, he thought that actually he would really like to get a full licence. So during the Direct Access course he rode a Susuki GS500, and as soon as he got on it, never wanted to ride anything but real bikes. When he passed he got a Honda Deauville (NT650), loved it, and has never owned anything but Hondas since. This bike bit the dust due to some gravel on a corner (so not my fault he shouts!) and the next week his wife fell for the fact that the Pan European would be a much safer bike…;) (ST1100). This unfortunately was sold when moving to Canada, where they lived for 6 years, one of the reasons they came back from North America is that he hated putting the bike away for the winter. It did take a little while to get another bike, (almost 6 months). And managed to get an old CB650, but hated it, so went to the dealers having priced insurance on the ST1300, and the VFR800. The wife didn’t like the look of the new VFR, and the ST was a little expensive new, but “I like the look of that one!” she said pointing to a beautiful black CBF1000, so we got that. And 10 years later he still owns one, unfortunately not the same one… but the less said about that the better.

Tobie read Roadcraft many years ago and after experiencing some track days realised he wasn’t aggressive enough to make it on the track, he just wanted to be the best rider he could be. So followed the principals in Roadcraft for many years. On returning to the UK in 2011, he had the joy of doing a Max Rider day and was convinced that he could pass a ROSPA advanced test, so took one coming out with a Silver. He then joined the DSAR to get his Gold. Since doing this he has become a tutor, but work schedules not making it possible to come on the training rides he is exclusively a one to one tutor.

Tobie became Secretary at the AGM in 2015 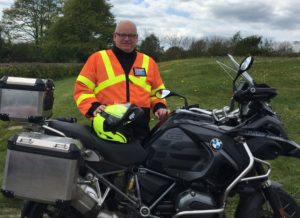 Returning to motorcycling in 2011, with the encouragement of my wife, I undertook the direct access route and I past my test. Following a year of riding around I found that I wasn’t enjoying it as much and feeling very vulnerable but not knowing why. So there was a Police Bike Safe Course being run locally and I decided to give it a go. What a revelation and I became aware that I really had a lot to learn and I really didn’t know what I didn’t know.

I then looked at Advanced Motorcycle Training and initially considered the IAM course but having looked at the ROSPA route I really liked the idea of the gradings and being regularly tested.

I took the plunge and joined DSAR in 2014 and Stan Hathaway was appointed as my Tutor and I passed my first test gaining a Silver a few months later.

I then undertook the Tutor Training and my learning took another big leap forward.

Roll forward 3 years and my retest loomed ever closer and I started to really worry about my own standard of riding. Enlisting the help of Stan and Malcolm Dyke (our resident police motorcycle instructor) they helped me polish up my riding and I managed to get a gold.

Every ride is a new training opportunity and I find something to add to the knowledge bank each and every time and for me this just adds to my enjoyment of riding there is just nothing like it!??? 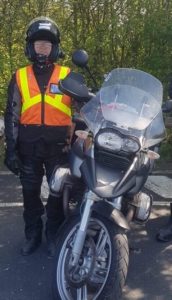 I passed my bike test in 1976, I then went on to get my car licence but still had bikes of and on, 9 years ago I took an interest in advanced riding and joined DSAR, I consider this is when my real motorcycling started.

I rode a bike as a volunteer with Devon Freewheelers for around 3 years, this experience was invaluable and I improved my riding considerably.

DSAR has brought me many other benefits apart from being a safer rider, I have met loads of friendly, interesting and kind people. My general confidence in life has improved, I now look forward to riding my bike and enjoying it much more than I could have ever imagined, oh and my local knowledge of the West Country roads is extensive now.

Attainments I have made with DSAR include:

Please come along to a warm welcome and some very interesting activities, you’ll love it! 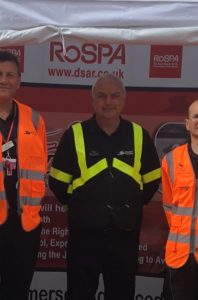 “I am currently a trainer responsible for the design and delivery of training for the Roads Policing business area. I am a Police motorcycle instructor and have some responsibility for the delivery of motorcycle and large vehicle driver training.

I started my career as a Bobby in Bridgwater, transferring to the Traffic/Roads Policing department in 1989. During this period I served as a patrol officer both as an advanced driver and advanced motorcyclist. I qualified as a vehicle examiner and Prohibition officer and as a result assisted the collision investigation department with many serious injury investigations. I have managed projects dealing with vehicles which were not properly maintained and or modified. For the last 10 years I have been based within the learning & development department where I have been responsible for the development and delivery of courses within the Roads Policing subject area. I provide training to many other forces and some partner agencies. I also deliver Advanced motorcycle instruction, Cat C & D1 training and Police Fast Road Safety courses.

A biker since a teenager I have a love of all things motorcycle and a strong desire to reduce casualties amongst riders.”

This website uses cookies to improve your experience while you navigate through the website. Out of these, the cookies that are categorized as necessary are stored on your browser as they are essential for the working of basic functionalities of the website. We also use third-party cookies that help us analyze and understand how you use this website. These cookies will be stored in your browser only with your consent. You also have the option to opt-out of these cookies. But opting out of some of these cookies may affect your browsing experience.
Necessary Always Enabled
Necessary cookies are absolutely essential for the website to function properly. This category only includes cookies that ensures basic functionalities and security features of the website. These cookies do not store any personal information.
Non-necessary
Any cookies that may not be particularly necessary for the website to function and is used specifically to collect user personal data via analytics, ads, other embedded contents are termed as non-necessary cookies. It is mandatory to procure user consent prior to running these cookies on your website.
SAVE & ACCEPT